The Mamilla Pool is one of Jerusalem’s most unexpected and less familiar sites. Its approximate size is 95X67 meters in width and 6.5 meters in height. The reservoir was built by King Herod during the time of the Second Temple, in order to store the spring water from the Solomon pools, which were located next to the city of Bethlehem. The water reached Jerusalem in long aqueducts, relics of which can still be spotted in many locations around the city. Today the reservoir remains empty and would only fill up by rainwater. During the winter it is being enjoyed by school children writing their biotope studies. 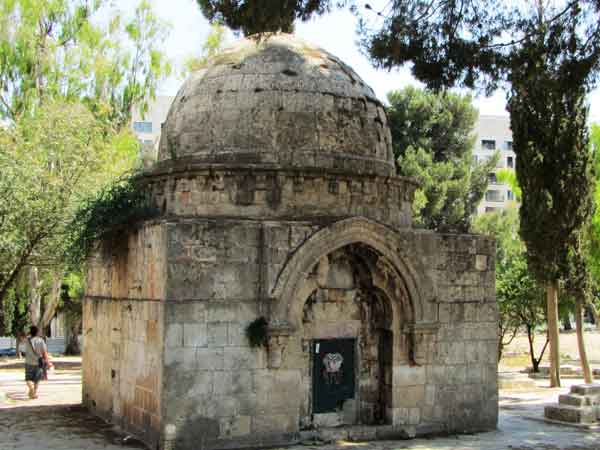 The water flowed from the Mamilla Pools to the ancient city using an aqueduct that run along present day Mamilla Street, and was stored in the quite hidden Hizkiyahu Pool, situated next to the Jaffa gate.

The Mamilla Pool is surrounded by the Mamilla Cemetery that was particularly active during the time of the Mamluks. Should you walk around the cemetery, you are bound to find some extra-ordinary tombs from the Crusader period.
The most noticeable spot at the cemetery is Turbat Allah Al-Din Iben Abdallah el Kochabi, the burial place for the governor of the city of Safed during the Mamluk period. His was known for his nickname El Kochabi. Built in the 13th century, the mausoleum is shaped as a cube, covered by a dome carried on a drum.