The term “Ketef Hinnom” was coined by the archeologist Gabi Barkai, who excavated the burial systems. The term is made up of “the Jebusite Shoulder” and the “Valley of Hinnom (Gehenna)”. Nine rock hewn burial systems, used for the burial of generations of important Jerusalem based families, were found on the site, dating back to the time of the Kings of Judah (First Temple period).

The dead would lay on a stone-bed “MISHKAV, that in the past was located within the cave. Once there were only bones left, the remains were placed in a niche underneath the bed. Because of this tradition, the archeologists named this niche the Gathering Space (“MAASEFA”). The following verse, from the book of Judges.

Most of the gathering spaces were stolen; fortunately one of them remained and was found filled with “surprises”. The most important discovery at the site was a rolled silver can inscribed with an excerpt from the Blessing of the Priests, written in ancient Hebrew letters: “May you be blessed and guarded by G-d, G-d shall extend his light upon you and may bestow peace upon you”. Quoted from the book of Numbers, this passage dates back to 2,600 years ago!

Gematria is an aicient system that gives a numerical value to each letter, this is the ancient alphabets Gematria bord: 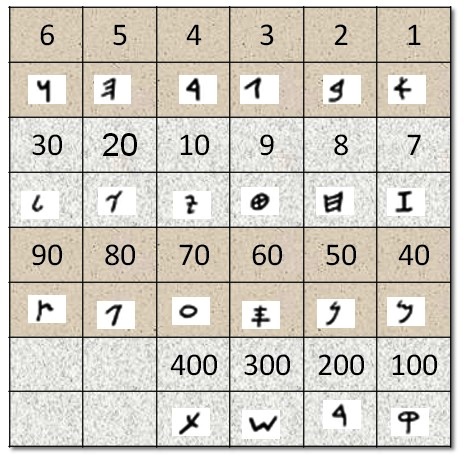